Liv Swanton wants a career in the STEM field. But the path to her goal is not the typical one.

Her rare and severe latex allergy prevents her from a lot of things in life. She can’t go rock climbing or bowling, do gymnastics or eat at some restaurants — among many other things.

“It makes my life ten times harder,” she said. “People don’t really realize how much latex is in the world until you’re allergic to it.”

Latex is often found in rubber, including hair ties, clothing, erasures, and most importantly for Swanton's career, medical gloves.

When Swanton, a freshman, is exposed to it through the air or by touch, she can go into anaphylactic shock, which severely restricts her breathing and could result in death.

For Swanton, studying chemistry in college was the dream. Coming to MSU, she wouldn’t let her allergy stunt her plan. So she met with the Resource Center for Persons with Disabilities, or RCPD, to make sure it happened.

A mission of maximizing ability

The RCPD is the on-campus office dedicated to offering services and accommodations to students and employees with disabilities.

Leading a staff of 20, Director Michael Hudson said everyone in the office is determined to help level the playing field. 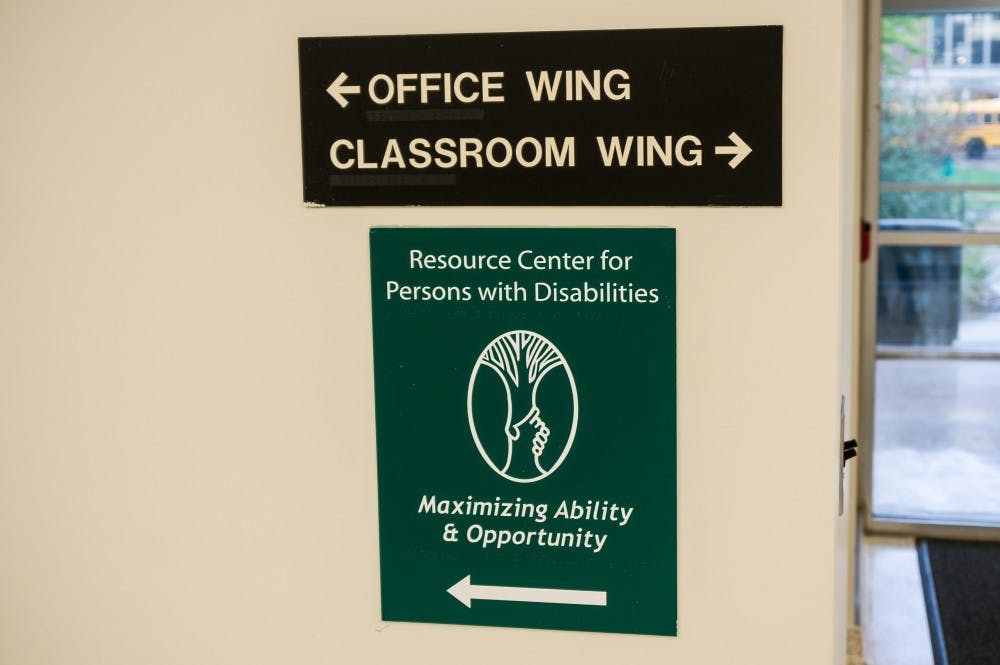 The Resource Center for Persons with Disabilities office located in Bessey Hall. RCPD is the office that provides accommodations for students and employees with disabilities.

“Everybody’s got a challenge,” Hudson said. “Our job is to make sure those challenges don’t become reasons for not succeeding or setting your goals and objectives too low.”

From May 2016 to 2017, 2,056 students and 240 employees with permanent disabilities received services from RCPD, according to the annual report.

The center finds as many ways as possible to help students with disabilities. They often give students electronic formats of textbooks with audible reading, so those who are visually impaired or have trouble focusing can still “read” required class materials. There are also two tactile embossers who create braille books and a 3-D printer for the office to use whenever needed.

Everybody’s got a challenge. Our job is to make sure those challenges don’t become reasons for not succeeding or setting your goals and objectives too low.”

Hudson boasted the center’s growth. He said the number of students registered increases every year —15 percent from the previous year — and they increased their staff to better accommodate the community.

He said many students feel they don’t need the services, or start at college without any accommodations then request them later.

Darryl Steele, an ability access specialist for students and employees with learning disabilities and/or attention deficit hyperactivity disorder, said he often sees this.

“We do have students, too, who say, ‘I’m gonna go to MSU,’ even though they may have received accommodations in high school, say, ‘When I get to MSU, I want to start over and try not to use accommodations.’ And for many students, that works. We just never see them," Steele said.

Both students with invisible and physical disabilities try to transition to college without accommodations from the center. Virginia Martz, the ability access specialist for students and employees who are deaf and hard of hearing, said many of her students were self-taught in high school. She said they relied upon printed material instead of lectures to learn and thought they could do the same in college.

When they came to MSU, however, they found new environments that challenged their compensatory skills.

“It’s a completely different transition: the size of the rooms is larger, the distance between the speaker is much greater, the ability to utilize those compensatory skills … that maybe isn’t an option in a large lecture,” Martz said. “And some of the material is taught through lecture, not necessarily print material.

“All the compensatory skills that they thought, ‘Oh, I can use this when I get to college. I can pass, nobody’s going to know. Nobody’s going to be aware that I have hearing loss.’ They find out usually at some point during their first semester that that may not work.”

Graduate student Ashley Rich knows what it is like to be overwhelmed by school and her disability.

When Rich first started the clinical social work graduate program, she was seeing a specialist for her anxiety but was not taking any medication. She participated in undergrad at the University of Michigan with few anxiety attacks. Though she’d heard rumors of grad school breaking up marriages, she didn’t expect the stress to be much more than before.

“It literally hit the first two weeks,” Rich said. “It became very obvious to me I was completely overwhelmed. I started crying to my professors, kind of freaking out.”

Rich soon registered her anxiety with RCPD and began exploring options for accommodations.

She struggled to engage with the audible books given to her. Despite it being the main accommodation option presented to her based on her symptoms, Rich said it missed the mark because there is no perfect way to approach anxiety.

“Mental health is very different from, ‘I’m deaf, I’m blind, I need a wheelchair,’” she said. “In that way, it’s easier for the school to accommodate you with certain things. With mental health, it’s a lot more difficult.”

Throughout her first semester in graduate school, Rich improved her compensatory skills like reading, just what she needed to get by and hiring herself a writing tutor.

For Swanton, her first few weeks of classes presented her own challenge. She had to drop a chemistry lab because it wasn’t safe for her.

Even so, Swanton isn’t swayed. She and her ability access specialist are working with an environmental health specialist to see if she can take the lab next semester, once they figure out how to either change the air system in the lab or get one that is completely latex free.

Swanton credits the university’s specialists for making everything possible.

“I trusted them the moment I talked to them,” she said. “I knew I wanted to be here; this is where I wanted to go because they would do whatever it took to make Michigan State and me a STEM major possible.”

“Being given the power to divulge your issues and your needs to your professors — it helps facilitate communications and support.”

But to Rich, the most helpful thing to her education has been the Verified Individualized Services and Accommodations, or VISA. It serves as the primary documentation that allows students to receive educational accommodations personalized to them without sharing their diagnosis with their professors.

“Being given the power to divulge your issues and your needs to your professors — it helps facilitate communications and support,” Rich said. “You know, the reason I may have not turned this in on time. Things are going on in my life and they’re crazy. The average person may be stressed out, but for me with anxiety — I was in full-blown panic attack mode.

“I one time didn’t sleep for three days and I passed out and had to go to the hospital. I break out in sweats, I’m throwing up. When I say I’m stressed, it’s on a different level for me. It’s a huge impediment to my life. … That has helped me through so many things,” Rich said. “I wouldn’t be graduating without it.”

“That’s difficult in its own way when people say, ‘I’m ADD, I’m OCD.’ People with it think, ‘You’re just feeling that way and I have to deal with these issues every day of my life.’ … I can’t just turn it off.”

Greenleaf has ADD and ADHD. Though it has never happened to him, he said it’s common for students to try medication used for his condition, such as Adderall, for recreational use.

“The way that disability is perceived gets reduced,” he said. “That’s where I really don’t like it. That’s difficult in its own way when people say, ‘I’m ADD, I’m OCD.’ People with it think, ‘You’re just feeling that way, and I have to deal with these issues every day of my life.’ … I can’t just turn it off.”

Greenleaf said experiences like that make students with disabilities feel less welcome or open to telling others about their conditions. He said since it can be so personal, others devaluing it in common conversation can be detrimental.

“A lot of people don’t understand latex allergies because, how can someone be allergic to a balloon?” Swanton said. “I have no idea, but it just happened.”

Like any other college freshman, Swanton made new friends. She doesn’t have a roommate — RCPD thought it was best to give her a single room because her allergy can’t dictate what another person has in their shared space — but she said her outgoing personality made living alone a moot point. 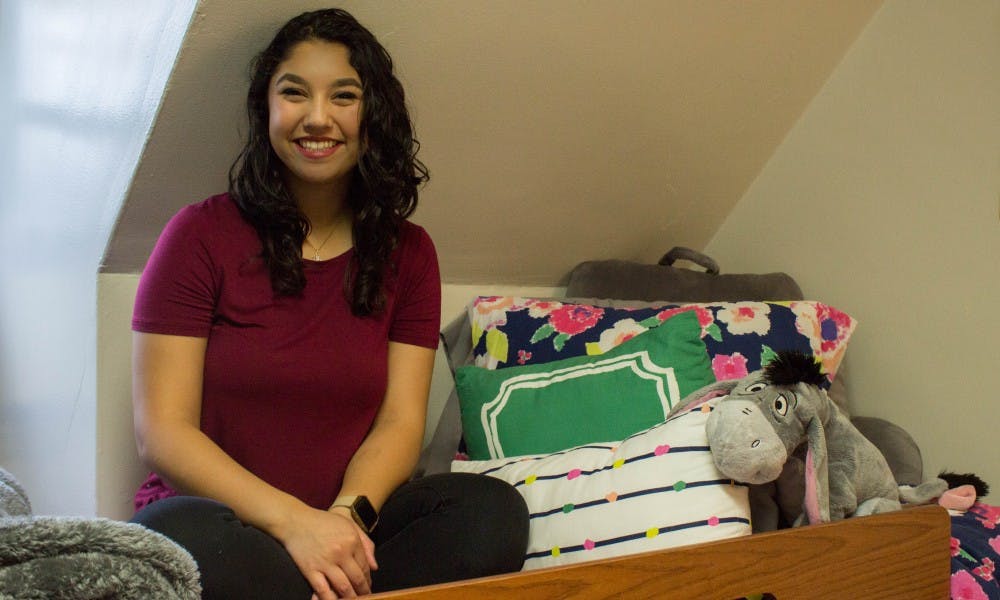 Still, Swanton said finding true friends can be difficult because people don’t know how to handle themselves around her.

“It’s harder for me to make friends who are empathetic towards me and more understanding,” Swanton said. “Relationships get difficult, but I feel like it kind of also helps weed people out.

“The friends I have now, they’re genuine people — they’re very caring and down to earth and they would do anything for me. I genuinely believe that I have a latex allergy and it helps me figure out who’s a genuine person and who’s not, and who’s gonna be there for me when things get bad. If they can’t accept that I have a latex allergy and don’t want to understand and try to understand, then I don't think I should waste my time trying to be their friend.”